Catherine Zeta-Jones is a doting mum to children Dylan, 20, and Carys, 17, who she shares with husband Michael Douglas.

The Chicago actress opened up about parenthood during an interview on the Today show on Tuesday, and revealed that she and her husband have suggested other career options to her children – who are both passionate about acting – because of the pressures of stardom.

However, the Darling Buds of May star - who was chatting virtually to hosts Al Roker, Sheinelle Jones and Dylan Dreyer from her living room in New York – admitted that her kids are not ruling out acting as a career.

"Michael and I would be the first parents to day, 'You know, maybe you should think of another career,' but we've seen how passionate they are about the craft. They know what celebritydom is. They know the good, the bad, warts and all that," she said.

She continued: "But their passion is about acting as a craft and they've done every theatre camp – my kids went off to summer camp every year, to theatre camp with the Broadway kids, and held their own very, very well, I have to say." 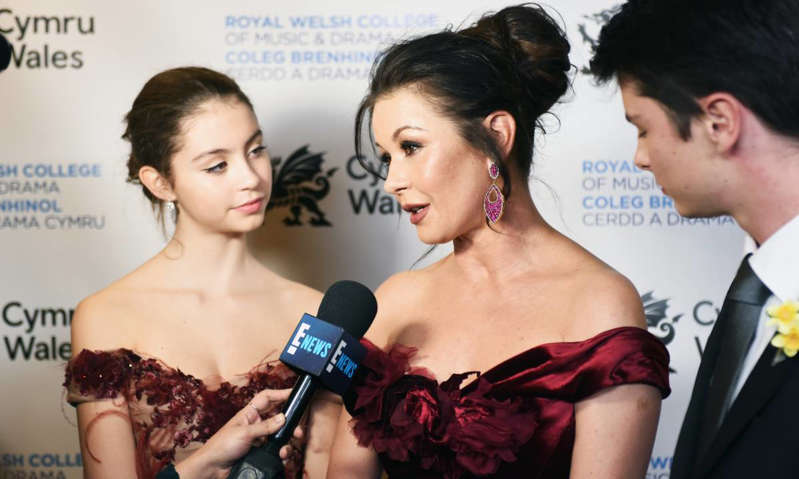 The proud mum added that her children are also extremely intelligent, and are currently studying academic subjects as well.

"They're both extremely bright and they're both studying history and politics. And they get all their brains from me!"

Catherine has previously shared videos on social media revealing her children's performing talents, including footage from Carys' school concert last year, where the teenager was on stage singing.

Carys and Dylan have their mum's brains too!

Carys and Dylan are incredibly close to their parents and enjoyed spending quality time with them at home during the pandemic.

Catherine opened up about her family's living situation during the ongoing pandemic during a recent appearance on Live with Kelly and Ryan.

"It was interesting because having my kids - my son is in college and daughter is away at school - but having them back during this time I realised I am a homebody," the doting mum revealed.

We have 44 guests and no members online