A mother-of-two has claimed that her newborn baby developed meningitis after hospital staff failed to give her antibiotics despite her being at high risk of infection.

Sophie Roberts carried a highly detectable amount of Group B Strep (GBS) bacteria throughout her pregnancy.

She told WalesOnline her quick labour meant she was unable to be put on a drip for antibiotics while giving birth as was originally planned.

As a result, Sophie expected Zaira-Jade to be given a course of antibiotics before leaving the hospital, but after she was monitored for 24 hours they were sent home.

Group B Strep is a type of bacteria which is very common and often harmless. However, there is a chance that it can spread to a baby during labour and make them ill.

This is why the mother is often given antibiotics through their vein while in labour, but Sophie didn't get to the labour ward before Zaira-Jade arrived.

Sophie and her partner Callum Thomas travelled the short distance from their home in Mountain Ash to the hospital in Merthyr Tydfil.

"When we got there I told the midwife I needed to wee and she asked could I hold it in until we got upstairs and I said I couldn't. When I sat on the toilet, it was her (Zaira-Jade's) head."

Zaira-Jade was born at 11.03pm, just an hour after Sophie's waters had broken.

"Through my pregnancy they told me that when I give birth to her she would go on antibiotics to rule out any infection.

"But when I gave birth they said it went too fast to pass anything to her in the birth canal. They said they would monitor her for 24 hours.

"Everything came back fine and I thought they knew what they were doing."

After giving birth to Zaira-Jade on the Wednesday night, the mother and daughter were sent home by Friday morning.

It is most common that any infection from Group B Strep would show up in the first 12 hours after birth, but symptoms of infection can develop up to three months later.

"When she was 11 days old, I noticed her breathing was weird," said Sophie.

"Then she projectile vomited twice. I said to my boyfriend something is not right and he tried to reassure me. 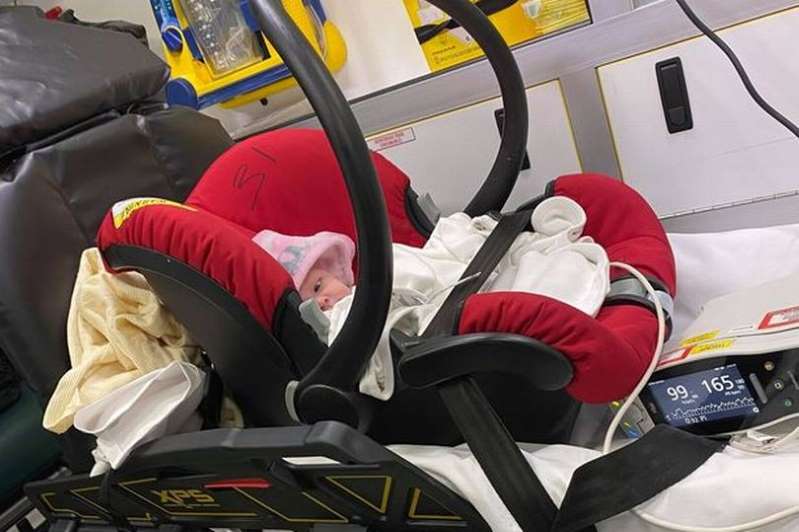 "I could just feel something was not right. We said we would see how she was through the day.

"By 9am she wasn't taking her milk and she was a grubber for it usually and then she started to make this grunting noise."

According to the NHS, grunting is one sign of a Group B Strep infection but Sophie said she did not know this at the time and claimed she was not given any information on what signs to look out for when she left the hospital.

Sophie said: "The baby's breathing was getting worse so I phoned the ward and they said don't bring her in unless she goes pale or turns blue."

"Looking back at photos she was pale but because she had jaundice I thought it was her colour coming back."

By the evening, Zaira-Jade had taken a turn for the worse and at one point she stopped breathing. Sophie was already on the phone to the out of hours service and they immediately sent an ambulance.

"When they came they sent her straight to the University Hospital of Wales in Cardiff. She stopped breathing again in my arms in the ambulance. They said straight away it was septic shock."

Zaira-Jade was in a coma for eight days fighting sepsis and meningitis. Sophie and Callum could not hold their baby daughter for three weeks while she was being treated.

After three weeks she was moved to Prince Charles Hospital before she started having seizures, and was sent back to the University Hospital of Wales.

"They told me I should have been told the signs to look out for and given leaflets. Maybe if I had known about the grunting, I would have acted faster.

"I didn't know what to do. I was trying to think positive but it was so heartbreaking."

When Sophie had her son Zayan Andrew Thomas, he also came down with an infection within the first few days of his birth but at that point Sophie did not know she carried GBS.

It is too early to tell if Zaira-Jade will have any long term impact from the infection and septic shock.

"We won't know if she has had any impact until she gets to an age where she would start to walk and do other things," said Sophie.

Sophie has made a complaint to Prince Charles Hospital about the care her daughter received and urged everyone expecting a baby to seek a test for Group B Strep while pregnant.

Cwm Taf Morgannwg University Health Board said it apologises "to anyone whose care has fallen short of the standard which they deserve".

Greg Dix, executive director of nursing, midwifery and patient care, said: “While we are unable to comment on individual cases, we deeply apologise to anyone whose care has fallen short of the standard which they deserve.

“We are committed to providing safe and high quality care for women, babies and their families and take any concerns raised about our services extremely seriously. We are grateful for feedback from women and families so we can work to address any concerns and make further improvements to our services.

“We continue to work closely with the Independent Maternity Services Oversight Panel to learn from incidents, support active engagement with families and staff and deliver safe and effective care. While much progress has been made, this is a journey of improvement. We remain determined to do everything we can to make all the improvements required to provide women and families with the very best possible care.”

We have 46 guests and no members online