It wouldn’t be a debate about abortion without a flagrant misinformation campaign about terminations after the first trimester.

A bill to decriminalise abortion was this month introduced in South Australia, the last jurisdiction to do so, and opponents of the legislation have already set about claiming if passed it would legalise and in fact encourage “abortion up to birth”, an offensive but ultimately meaningless phrase. It has been the relentless catchphrase of anti-abortion lobbyists, religious leaders and conservative politicians in every single push to modernise abortion laws in this country but it is not uniquely Australian.

Earlier this month the United States president, Donald Trump, tweeted that the Democrats were in favour of “(very) LATE TERM ABORTION, right up until the time of birth, and beyond”, echoing his previous descriptions of scenarios in which the mother and doctor decide to “execute the baby” after birth.

In the lead-up to a bill that would decriminalise abortion in New South Wales, anonymously authored anti-abortion flyers that compared women who have had abortions to Nazis and falsely claimed the proposed law would legalise abortion “up to birth, for any reason” turned up in letterboxes around Sydney. In Queensland, a persistent campaign of radio ads, unsolicited robocalls and petitions about “abortion up to birth” plagued both pushes to remove abortion from the criminal code. In fact, just last week, two years post-decriminalisation, Queenslanders were letterboxed with flyers from anti-abortion lobby Cherish Life, claiming Labor allows abortion up to 37 weeks gestation “for any reason”. 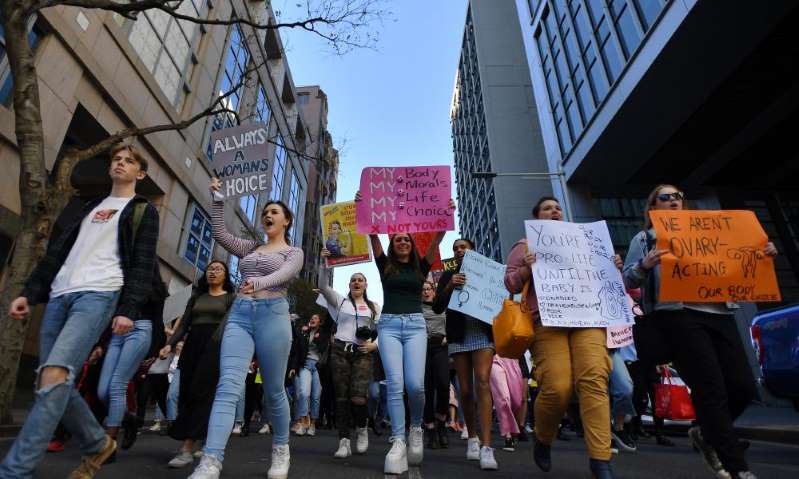 It doesn’t matter how many medical experts or bereaved mothers testify to parliamentary inquiries about the statistical rarity and painful reality of later-term abortions, this myth won’t die and there is no issue I have spent more time fact-checking. I can’t help but think of all the families and doctors implicated in this fear-mongering.

These decisions are rare. I think of the Queensland obstetrician and maternal-foetal medicine specialist Dr Carol Portmann, who in her 20 years of experience handling terminations after 20 weeks told me she has only ever performed a termination in the third trimester because the mother’s life has been at medical risk or the foetus has been found to have a severe heart or brain injury and the pregnancy is non-viable.

These decisions are hard. I think about a grief-stricken mother who described to me the trauma of enduring the induced labour involved in her termination at 19 weeks gestation for a very wanted but non-viable pregnancy. She will never forget the thud of her dead foetus hitting the bedpan.

These decisions are subject to rigorous medical consideration. I think of another mother in Adelaide who was told by doctors she had to terminate her pregnancy at 24 weeks as her foetus was dying inside her and for four days she waited in hospital for an ethics board to sign off on the most traumatic day of her life. The family had a private burial at a cemetery, where they visit every day to lay fresh flowers at the grave.

These are the families former senator Cory Bernardi called selfish.

“It is murder of an unborn baby that could exist outside of the womb, and it shouldn’t be done on what I would say is the simple demand, or the selfish demand, of an individual involved,” he declared to the Senate.

I think of the senator Janet Rice rising to respond to this, tears in her eyes. “[Most late-term abortions] are because there are issues with the development of the foetus, and that was certainly the case for mine, and yet [other senators] are willing to stand here in this place and call me a murderer,” she said.

South Australia’s religious leaders and the Labor MP Clare Scriven have said decriminalisation would lead to a surge in late-term abortions. In the Northern Territory, the 2017 decriminalisation of abortion in fact led not only to fewer terminations but terminations at an earlier gestation as they could more easily access abortion drugs which can be taken in the first nine weeks of a pregnancy.

If this bill passes next month, it will bring the state into line with the rest of the country by removing criminality for patients and doctors. The irony is “abortion up to birth” can theoretically happen already in South Australia and other jurisdictions if it is necessary to save the woman’s life, says the vice-president of the Australian Medical Association, Chris Moy, but as the South Australian Law Reform Institute concluded in its report, abortions after 20 weeks anywhere in Australia are extremely rare and there is always a multidisciplinary team involved.

“Women who face these decisions … are intelligent and have emotions and consciences, which is not the picture painted by critics of the bill who often portray women as lacking thought and making these decisions willy-nilly,” Moy says. “[Abortions at this gestation] are always for compelling reasons, where women and their partners are facing terrible decisions such as late diagnosis of fatal foetal abnormality or a new maternal cancer diagnosis.”

An anti-abortion group last week published a half-page advertisement in the Advertiser claiming the bill legalised abortion “up to birth”. It used an outline of a forearm as a reference measurement to show how big a foetus is at 37 weeks. Anti-abortion groups have repeatedly failed to provide me with case studies of terminations that have occurred in the third trimester for anything other than devastating medical reasons.

Most abortions happen before 13 weeks because it doesn’t take a person many more months, a lot more money, potentially travel and multiple more medical hoops to jump through to know whether they want to continue a pregnancy. The mothers I have interviewed who had ruinous diagnoses after the 20-week mark wanted nothing more than to carry a healthy pregnancy to full term and they don’t need a crude chart to know how big a flourishing foetus can get to days before it is born.

Reproductive rights are perpetually on the precipice of revocation but I hope this is the last time we subject highly trained clinicians and families who have had to make often unthinkably hard decisions to such a slanderous debate.

• Gina Rushton is an Australian journalist specialising in reproductive rights. Her first book The Most Important Job in the World will be out in 2022

We have 107 guests and no members online